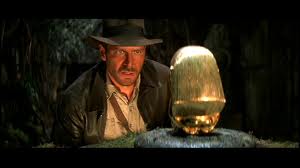 Indiana Jones and the quest for the perfect shoe.

A long time ago, after the popularity of my bitter post about socks, I had planned to do the sequel post about shoes.  However, my virtual garbage can was empty, with wadded up ideas strewn about, usually missing the virtual target pretty badly.  It’s not like I am a bad shot, (I made my high school sophomore basketball team after all),but many of my ideas were just “off the mark”.  Then, the other day when I was slaving away avoiding work, I overheard a conversation two females were having about buying shoes.  They recounted the whole shopping experience from beginning to end. There was the search, to the size of the shoe, to the sparkle, to the fit, to the size of the heel and finally how expensive it was.  If I was from another time period, say, the ancient year of 1984, I would have thought I was overhearing these girls talking about being Indiana Jones in Raiders of the Lost Ark.  Except their movie would have been called Girl and the Quest for the Perfect Shoe.

The only way I can explain this type of thing to men is how we recount the last two minutes and three overtimes of a basketball game. Stories are told, emotions fly, awe is on the faces of those that hear the experience recounted.  This got me to thinking about a scenario.  If there was someone (and that someone would almost assuredly be a man) who invented a shoe that could be used for everything from the beach, to work, to a wedding, to laying on the couch and that once he invented it it would be the only shoe we could wear, would this shoe ever get invented?

Did you see the last two minutes of the game last night? Let me take a half hour to recount it all….

I have a feeling that he would at the same time be metaphorically lifted on the shoulders of men in celebration and on the other hand sacrificed to the God of Shoes by women. In fact, I imagined a battle in a world sized arena, with the population of men vs. women, where the invention of this shoe is in the balance and whoever won would get to choose whether this invention lived or died.

They can take our lives, but they’ll never take our…SHOOOEEESSS!

The rules would be that in the battle the women can only wear their favorite pair of shoes, which I assume (cause you know what that does) would be their at least 4 inch heals, that matched their favorite outfit, while the men would be allowed to wear their most comfortable (and possibly only pair).  I predict a slow start for the women as their would be a lot of tripping, and spikes breaking but they would probably win in the end as they would use the spikes on their heals to beat us to a pulp and run us through.

So in conclusion, what makes me so bitter about shoes?  Whatever I want, I’m Bitter Ben dang it!  But mostly that there is no epic battle in a huge arena to decide whether there is an all purpose shoe.