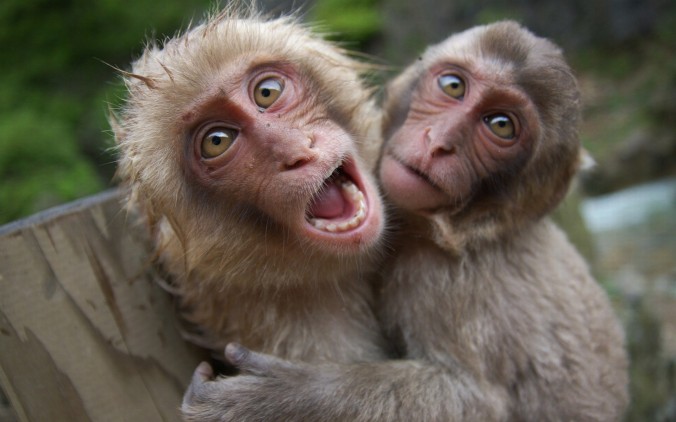 The guys responsible for writing my post yesterday. Hacks.

First of all, to those that read that garbage that was on this blog yesterday, that was just inexcusable. I blame someone else, as per usual. The dog ate my homework, the cat wouldn’t stop shedding all over, the hamster wouldn’t stop running in circles…is what I would say if I had any of those things.  What really happened was some monkey’s hacked my WordPress account and decided to give up halfway through the post.  Actually, it was the sitcom writers over at CBS. Regardless, if you read yesterday, you deserve you money back.  So write CBS for that.

Now, on to the bitterness at hand. As you know the Golden Globes were last night and it got me thinking. If I were a movie, what kind would I be?  I would not be not be a romantic comedy. I’m not romantic, I’m not attractive, I don’t walk around the city drinking coffee staring wistfully at leaves, and I don’t live in New York or LA. I absotively, posolutely, despise writing cliche dialogue. Any time I catch myself saying or writing that kind of stuff, I punch myself in the knee (you thought I was gonna say face, right?)

The most important reason why I can’t be a romantic comedy, is because people in those movies talk in paragraphs.  I speak one liners.

So I’ve decided that I am an action movie.

I’m sure you are laughing uncontrollably right now, imagining me stumbling around the world, trying to kill terrorists with eye patches, and evil bitter smirks.  You are probably laughing when you imagine me trying to diffuse a bomb, with my sticky fingers after eating too many glazed doughnuts.  Or being confident in the one on one battle of wits in my face to face meeting with the villain. Action seems to be in complete contrast of my personality.  But I’m not talking about being the Ethan Hunt guy, or even the Benji of Mission Impossible. I would be the assistant security guy that guards the doors at the CIA.  I wouldn’t be the James Bond guy, or the even the Q, I’d be the guy that gets coffee for the guy that gets Q coffee.

When I say I’m the one liner guy, I mean just ONE line.  Also when I said I can’t write cliche dialogue? That polar opposite happens when I actually talk out loud. I would be the guy at the front desk that says, “The boss will see you now.” except I would try to make a joke out of it and say, “Would you like coffee, tea, or punch?” and they would say, “Punch?” and I’d be like okay, “Here’s your punch!” and punch them in the knee. Of course, they would knock me out immediately.(Alright, maybe the two liner guy.  Sometimes these things take a little time to set up.)

Other lines I would deliver:

As the guy in the car waiting in traffic because there was a 30 minute car chase that destroyed every other car and most of downtown. “Do you think I could save 15% or more on my car insurance by switching to Geico?” to no one in particular.

As the guy who was is getting a bagel at the bagel store, that is getting ripped to shreds by two guys fighting. “Does anyone know if the buy 12 bagels, get a free one is still going on?” to no one in particular.

As a guy in a subway car that just got derailed and saved by a guy dressed in a Spiderman costume. “This subway system is almost as bad at the sub I had at Subway last night,” to no one in particular.

Subway was pretty bad for you last night too huh?

As a guy at the Christmas party at Nakatomi Plaza finding out that their boss was just taken hostage. “Does this mean we aren’t getting our Christmas bonuses this year?” to no one in particular.

A guy that is part of a club of people that fight a lot to someone at work the next day. “Dude, I gotta tell you about this Fight Club I was at last night!” to someone in particular.

Actually, it would probably be better if I was the bitter guy in a disaster movie. Otherwise known as my life.

Bitter Guy and a Movie Ben