And get out as soon as you can.

I grew up in South Dakota. As the butt of almost all jokes from other states except from our Northern brethren, North Dakota, it was hard to defend South Dakota. Most states were either bigger, faster, stronger or more famous than us.  At least I was from the biggest town in South Dakota, which was kind of like being the biggest miniature ant. That doesn’t make any sense, but neither do I and I don’t make many dollars either.

The point being is that South Dakota forged me like steel into being the bitterest man alive. Growing up there also allowed me to not be very funny either. It wasn’t until I got college that I learned the art of the comeback, which is a sneaky way of seeming funny, but really is just my underhanded way of insulting people. When I was growing up, I only knew of one insult for one of my bordering states named Iowa. 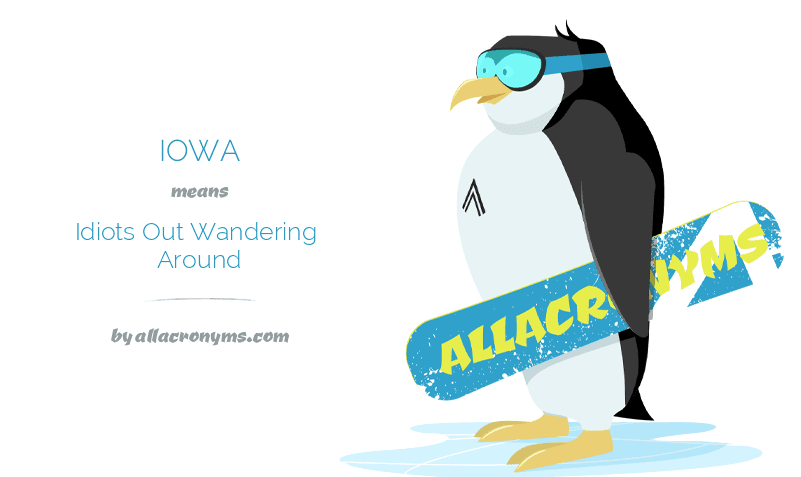 Or in this case, penguins wandering around.

If you don’t know, I.O.W.A. stands for Idiot Out Wandering Around. I apologize to all my readers from Iowa, not at all. You deserve it for all those times you made fun of South Dakota for you know, sucking. Anyways, as I am want to do, I ramble, which is much like wandering.

Speaking of wandering, the other day, I became an honorary Iowan. I was out shopping with my wife at Sam’s Club. We were heavily into a conversation about jobs, and talking about robbing banks as a new profession for me, when we got out of the car and entered the store. I got distracted by the monster 65 inch 4K TV’s that they always display to make me bitter that I don’t have one, when my wife said, “Oh shoot, we forgot to bring in the return we had.”

I was yanked from the fantasy of people taking a hike up Machu pikachu in 4K, when she asked me to go out to the car and get the return. In a daze, I walked out to the parking lot, and was suddenly transformed into a 96 year old man.

I completely blanked on where we parked the car. My usual good sense of direction was robbed from me like the banks I will soon rob as a profession. My usual keen knowledge of where we park things, was Taken like Liam Neeson’s daughter in every movie he’s in.

I just assumed someone stole our car. That had to be the explanation right? So I tried all the old tricks. I used the remote to open the door so I could see the lights of the car. I hit the panic button so I could hear where it was (and let’s be honest, so I could freak everyone out) but nothing. I guess you have to be close enough or that doesn’t work.

Me(played by John Travolta) in the parking lot.

So here I was, and Idiot Out Wandering Around in a parking lot, holding a key above my head, hoping to find our stupid car. I kept wondering if a girl scout was going to walk up to me and say, “Are you lost, old man? Can I help you find your bus?”

But alas, I found it, (without anyone’s help, thank you very little) and eventually returned to my 4K TV programming. By the way, the whole episode started over, so I guess I will never find out if they made it to the top of Machu Pikachu.

My wife easily finds me at the TV’s and asked, “So, did you return the shirt?”

Me looking at her dumbfounded. “Ughhhh.”