This is how job hunting feels.

You should probably expect all my writing these days to focus on the bitterness of job hunting and how horrible it is, since it is taking all my focus. So whether I say it straight out or not, everything I am bitter about is either that or a metaphor for that.

A few weeks ago, I was driving down the speed bump filled road out of our neighborhood. The legend goes that a couple years ago, someone was driving too carelessly on the roads and an accident happened. Just like with every other tragic thing, instead of trying to figure out why one person was careless, they spent a whole lot of money, taken from our HOA money of course, to put a thousand speed bumps in our neighborhood. It makes us drive slower sure, but it also ruins our cars, irritates any guests coming into the neighborhood and costs us a whole lot of money to maintain.

The best part is that they keep telling us that we are going to get more speed bumps. We often wonder how in the world a fire truck or police car will make it into our neighborhood in a hurry if say, someone has a fire or a burglary in their home. I’ve complained about that enough in past blogs.

The problem now is that I think that the excessive use of speed bumps may have caused another problem. Just past the last speed bump of the neighborhood, when we finally escape the constant pounding on our cars, a few orange emergency cones popped up a few weeks ago. At first, I just ignored it because I see those cones around all the time, even at schools to slow people down for kid crossings.

Upon closer inspection, a few days later, it appeared like there was a little hole in the street. I thought, just like the people repairing it, that it would be a simple fix. Lay some asphalt or concrete over the hole and it would just fix it. I didn’t know why it took so long, because it was the size of one of those sewer crates. A few days later it was fixed, the next day the cones were removed and we were back in business.

Being like Micheal Scott, I had to test the strength of the new asphalt.

Our road was as solid as the Titanic.

To the naked eye, it was solid. A few days later, I see more cones. I wondered why, especially when I had driven over it a few days ago and nothing was wrong. I mentioned it to my wife and she asked if I had looked closely enough at it. I did and noticed that the pavement was cracking. Several hours later and the whole thing was sinking. We now have a sinkhole in our neighborhood.

I worry that one of these days not only will an orange cone end up below the earth, but perhaps a small child on their walk home. Oh and in case you want to buy my house in 10 or 15 years, that huge hole in the earth is an underground amusement park we are building that will open soon after you buy our house.

Also, that sinkhole is a metaphor for job hunting.

Target Deal of the Day: Skyline 21″ Spinner Carry On Suitcase. When you can handle the sinkhole anymore and just need to get away, here is the way to escape. Get a suitcase, a plane ticket and go to where the sinkholes are much bigger and more of a tourist attraction. Maybe even store some apples or other gross fruit that you can throw into the sink hole. The suitcase is on sale for $35.99. Get you sink hole suitcase today! 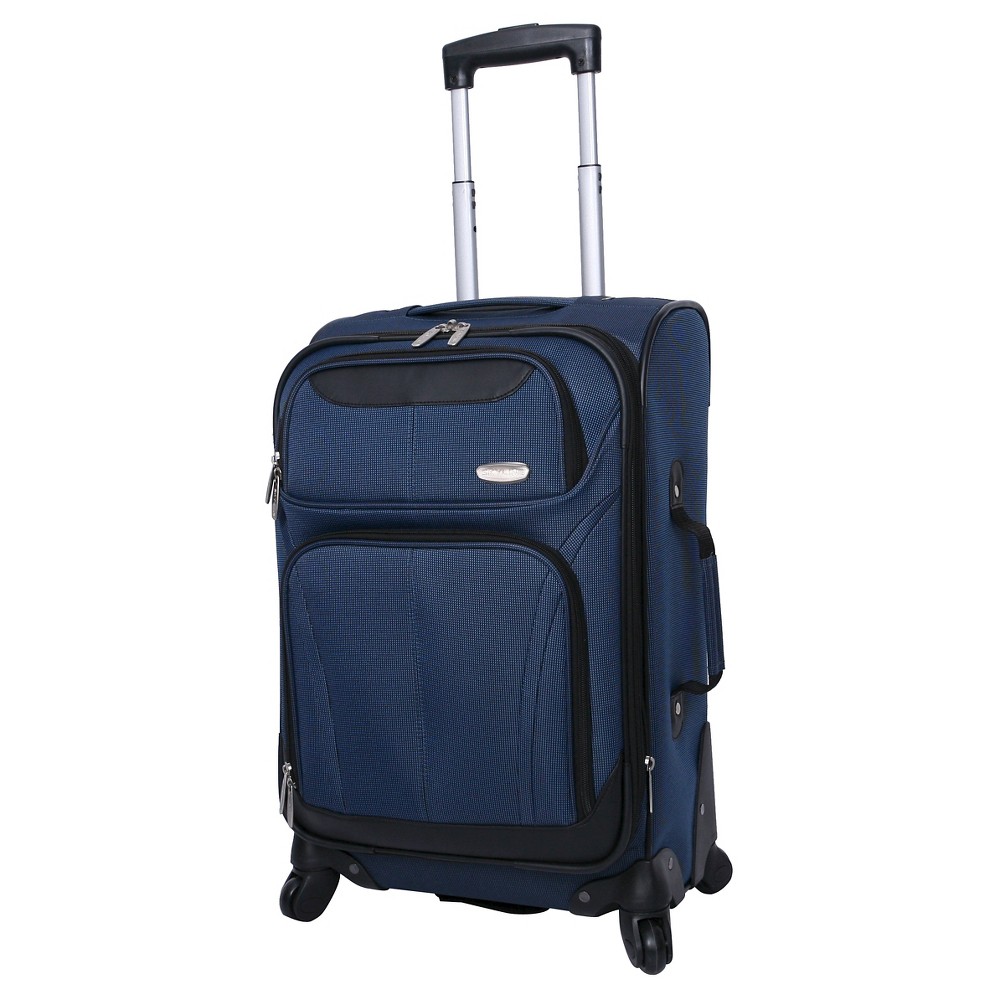 4 thoughts on “Down into the Sink Hole”