The Force is a triangle.

A lot of impressive things happened last night. The Golden State Warriors broke the win record with 73 games, Kobe Bryant scored 60 in his final game, I got three Kabooms in one match in Gears of War 3, and even managed to get to bed before 11:30 pm. Truly impressive physical feats last night.

Not as impressive as the Force though. The latest Star Wars movie The Force Awakens made like a trillion dollars and force choked the prequels back into the history books. It has an amazing appeal to people because of many things, but I think one of the most impressive things about the movies is the bitter rivalry between the Light Side and the Dark Side. Whether it is the people that seemingly choose one or the other, or the “universe” somehow balances it, people are fascinated by those two “factions”. But there is a little known third faction that completes the Triangle. There is one more side called the Bitter Side, that no one talks about in the films, books TV shows, or video games. There are people in the universe that are neither light or dark, but just plain bitter.

They live in the cities, and in the catanas, and in the space ships. They work in the impressive high rises and on the farms. They aren’t “chosen ones” that are plucked from farms, or “the best pilots in the galaxy” or defector Storm Troopers. They are just regular dudes and dudettes that are sick and tired of their neighborhoods being blown up, or shrapnel from the next new Death Star ending up on their lawns, or all these boring Senate meetings being blasted on their big screen Space TV’s.

Ugghh. Another Senate meeting pre-empting the basketball game? Can we change the channel?

The only Force Awakening they are getting is their alarm clocks that Force Awaken them to take a shower and get to work before they get Force Choked by their dark side boss.

They are not left without powers though. In fact, they have just as impressive of a list as the other two sides. Here’s just a small sampling of the powers that manifest when you are part of The Bitter Side:

Force Chokers- We have the amazing ability to miss a game winning free throw in the Galaxy NBA Finals against the Tatooine Travelers when the game is on the line. The ability to ask a Princess Amidala out on a date right after someone more impressively Dark Side asks her out. Or how to blow your Space Bridge presentation at work on Level 5002 in the Jedi Sword Inc company.  How to hit skylane traffic at the optimal time. When it comes to pressure, Bitters always choke under it. 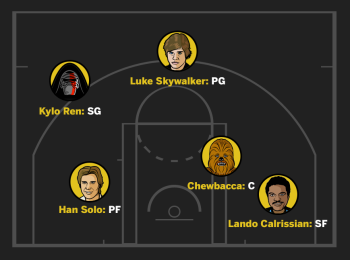 We would choke against this basketball team.

Force Jump – Bitters are amazing at jumping to conclusions. We like to take just one side of a discussion and leap to our own worst case scenarios. If we hear there are layoffs, we assume it’s because our building was destroyed in a dark vs. light skirmish. If we hear someone is late, we assume that it’s because they hate our baked dru’un slices in fish sauce. If the death star goes down, we assume gas prices will go up.

We are really good at jumping to conclusions.

Force push – We have the ability to be pushed around. When we are on the Coruscant Highway, we are continually letting people in. When we go to a restaurant and it gets busy, we always seem to let Jedi’s go first (seems like my mind is always being tricked) and it always seems the Jedi will always get the jobs when it is between us and them at a job interview.

Light sabres – We have light sabres too, but they show up lime green. And they are powerful too. They are strong enough to open a can of soup, and they occasionally help us unlock a door when we accidentally lock ourselves in (when we remember to carry them with us of course).  They are really helpful for when we are picking weeds out of our gardens and we need to be really careful with them because one time I got a really bad second degree burn when I dropped in the sink when I was brushing my teeth. I had to wear a band aid for like a week one time.

A whole week that one time.

Jedi mind tricks – We have this amazing ability to manipulate the mind and cause others to do our bidding. Well, mostly we have to yell really loud at our younglings and tell them they have to go to bed when they stay up too many cycles, but when we yell really loud, they tend to listen that one time. Drop the Jedi Mic yo!

Yeah, feel the power of my Jedi Mind trick kid!

Force vanish – I like to use this power at work. When it’s the end of the month and the Light Sabre metric reports are due and I don’t have them finished, I like to Force Vanish call in sick, or if I’m at work, I Force Vanish to the bathroom or Force Vanish and take a long lunch.  It works wonders for making Freideldy in accounting have to finish up my reports.

Where’s Bitter Ben? His report is due. Uh, he just force vanished again.

Hopefully, someday they will talk about the Bitter Side as reverently as they do the Light and Dark side, but just kidding, they never will. But just know that without the Bitter Side, who would do all the mundane and unimportant jobs in the Galaxy? Who would fuel all those late Death Star runs to 7-111? Who are the ones building the tall buildings that the Dark and Light side will eventually destroy? Who are ones clogging up traffic, so the Dark and Light sides can have a thrilling chase? Who are the bitter half-wits complaining in the cantanas that can get Jedi Mind tricked for comic effect? That’s right. Without the Bitter Side, there would be no Force Triangle.

44 thoughts on “The Bitter Side of the Force”