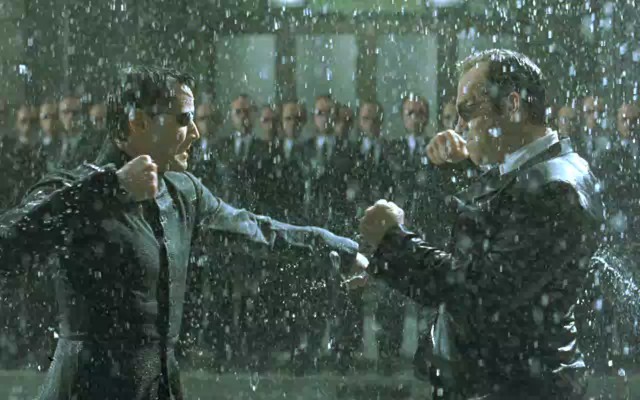 The Matrix is my all time favorite surprise movies. After I graduated college, I continued to be just as much of a dork as I was in college and that meant I went to see a lot of movies alone. I was okay with that because it was really hard to find people as bitter as I was to go do stuff with and people are the worst anyways. So one time, around my birthday, I went to the movies without any movie in mind. I was just going to pick one when I got there. The Matrix. Interesting name. I hadn’t heard anything about it. In fact the only thing I knew about the word Matrix was the Optimus Prime had the Matrix of leadership in his chest. And since he was the coolest robot to be a truck ever, I guess it was a good thing.

As you know, the Matrix was amazing. It was one of the last movies I remember being totally and completely surprised by. Nowadays, any movie you want to see will have teasers and trailers and a pre-planned Super Bowl ad that they will pre-air before the Super Bowl just to get you excited for the Super Bowl ad. No good movies are a secret anymore. And trailers are getting better and better…at revealing everything. Which leads to massive let down.

Kind of like this post will be by the time all the hype of the first few paragraphs have worn off. As you know in the Matrix, there are huge rivalries, but none bigger than Blue Pill vs. the Red Pill.

Red pill or the blue?

The Blue Pill – According to the movie, “You take the blue pill, the story ends. You wake up in your bed and you get to believe whatever you want to believe.” So in other words, the lazy pill? Laying in bed? That sounds niiice. And the steaks? Out of this world. And I’m not talking about the stakes between living and dying, I’m talking about New York Strip and Tenderloin and Filet Mignon. Red pill just gets you a little mush.  On the bitter side, they don’t promise you an X1 TV remote where we could just speak into it and get the program whatever you want. Yeah, that steaks are pretty tasty, but you actually have to pay for them. And the woman in the red dress might be pretty hot, but on the other hand she is kind of annoying. All dressing up  and shooting you in the face like an agent kind of sucks.

The Red Pill – According to the movie, “You take the Red Pill, and you stay in Wonderland, and I (Morpheus) show you how deep the rabbit hill goes.” If you decide to go into the Matrix, you get some pretty nice threads (all black of course), a nice remote control that allows you to jump to your death and bounce, learn ju-jitsu and kung-fu and learn how to fly. You get to dodge bullets, find a new rival that is a computer virus and get to have all kinds of philosophical conversations with keymakers, mainframes and old traffickers of information that have great taste in whine and sound like Frenchmen(while having a conversation with a guy about traffic sounds pretty dull). On the other hand, you have to go down a water slide, get metal unhooked from your spine, and sleep in a metal ship that has a way uncomfortable bed. And being the Chosen one and saving the world is kind of exhausting.

So, which pill are you? Are you a boring but safe Blue Pill person that is hard to swallow? Or are you a more adventurous, but exhausting Red Bill that causes way too many side effects? Vote down in the comments, you bitter pill maniacs…

59 thoughts on “Bitter Rivalry of the Week: The Red Pill vs. The Blue Pill”