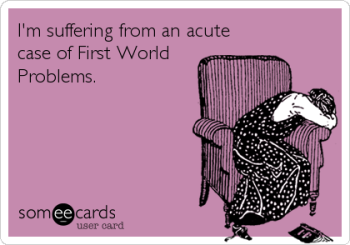 Sometimes I have problems too.

We all go through a certain amount of suffering in our lives. Some more severe than others that is for sure. I know everytime I decide to complain, I get an earful from everyone about how there are starving kids in Africa and many people have suffered way more than I have in just about any aspect I have, except way worse.

I get it and that is true. That doesn’t mean that I don’t feel mad, or sad or bitter when something crappy happens to me. And just because other people suffer differently than I do, doesn’t mean that my bitter just goes away immediately. Because maybe they suffer more than I do in some ways, but they don’t suffer as much as I do in other ways. I think we should all be allowed to be bitter in some ways. I just choose to be bitter in all ways.

The only suffering he had to endure to become the Man of Steel was be the last surviving person from his planet. NBD.

Speaking of suffering, if all it took was a little parental discord, or being the last person on my planet to survive, or being buried under the ice for 70 years and waking up in the modern world, or being stuck in a cave where terrorists were demanding that I build them a bomb because I was the head of a weapons company that my father built called Gardner Industries, I would probably do it.

If all Batman, Superman, Captain America, Iron Man and all these other superheros had to go through were these things, hmmm maybe I could do it. Do you think there were superheros that had to go through such struggles as social anxiety, claustraphobia, laziness or being unemployed for a little bit?

What about bitterness, bad back, bad knees, bad digestion problems and a bad shoulder? I bet some writers could work with those hardships right? Does it always have to be a parental problems as motivation for these superheros? Why can’t it just be a parent who has kids that whine a lot? What about a guy that sometimes has to stay at work a little late and misses lunch sometimes?

Or a guy that gets so angry at traffic that sometimes he thinks really bad thoughts at someone before he decides that he won’t honk because that would just cause more people to get upset.

What about a superhero that gets all these abilities because he has to deal with co-workers that are way too chipper in the morning, or they talk too much while he is just trying to get work done.

What about a superhero emerging because he just has a habit of losing things all the time. Not big things, but you know a wallet every once in a while, or his keys, or his water bottle, Ipod or camera sometimes. Maybe he gets mad when clothes just don’t fit, or he’s just really bad at matching. Would the world be upset if his uniform didn’t quite match? Would that be the worst thing?

Maybe the first world needs a First World Superhero too. Just because his or her origin story isn’t epic in scope and sadness, doesn’t mean he or she can’t save the planet from Thanos or Megadeath, or from burnt toast.

What do you think? What super suffering are you dealing with so you can be a superhero?