I just said this out loud so I could claim the quote.

As we come to the end of yet another first week of school, I think about the fact that this is my son’s first full half week of half days of “real school” known as kindergarten.  Every week this will make me more bitter because he already closing the gap on how much smarter I am than him.  Yesterday, he told me that he would learn how to turn a computer off “without the button”.  I told him, “When I was your age, computers were something only the government and military used.”  He said, “Whoa! Really?” and walked off with his 3DS, that would have made the government in my day say, “Whoa, really?”  Since my intelligence is decreasing each time I watch a reality TV show and eat a pizza, my kids should catching me by the end of the summer.  Maybe if I can encourage them to skip homework and watch TV with me, I can seem superior for a few more months .  Bitter luck, next time me.

What is wrong with this picture? Kids sleeping peacefully.

I’m bitter because I didn’t know this earlier.  I’m going to go ahead extrapolate this data and say that if I sleep on the couch and watch TV, I would burn almost twice the amount of calories.  I am going to tell my boss as soon as she gets in that we need to start being more healthy by sleeping and watching TV at the same time in order to burn more calories.  She will probably say something about how she doesn’t care how healthy I am, but more about “how much work I do”.   I will then tell her how she should care more about employees and we will then be in a bitter feud all because she wouldn’t let me be healthier.  I win…and lose. 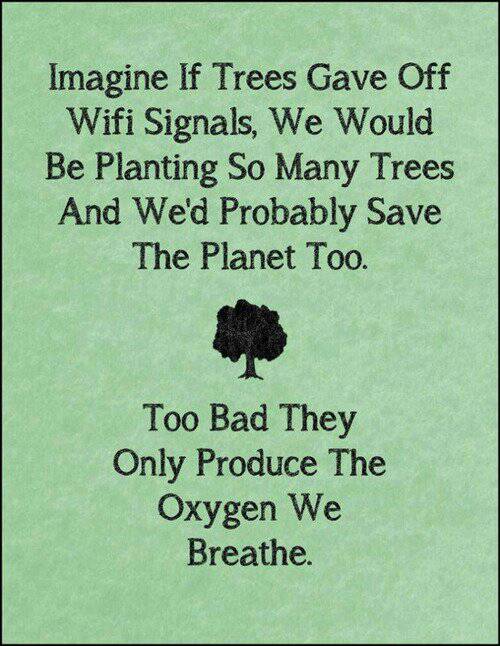 All they can do is help us breathe?

Speaking of being able to do two different things, I think trees need to start stepping up their game.  I’m am about as lazy as it comes, but as you can see above, I can both lay on a couch, watch TV and ignore other people at the same time.  Trees produces oxygen, I produce carbon dioxide and other “emissions”.  Trees can reproduce themselves.  I can reproduce a child and a tree.  Trees make wood.  I can make things with wood and plastic.  Trees produce paper.  We can produce white paper, colored paper, newspaper etc.  We can produce Wifi, trees just get in the way of Wifi.  So in a contest of versatility and multitasking, we win.  So, how about working on some WiFi for us trees? Then we might be willing to plant more of you.  Besides, I’m pretty sure you guys outnumber us.  If you really wanted to start a rebellion, you could totally take us over.  But you prefer to just stand there year after year.  Lazy trees.